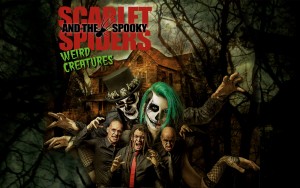 And now for something completely different… SCARLET AND THE SPOOKY SPIDERS released “Weird Creatures” (Cavity Records), an outstanding album that is settled somewhere between THE DAMNED and the late SISTERS OF MERCY, mixed with some glam-moments à la NEW YORK DOLLS and Deathrock (the band was featured on one of the “New Dark Age”-Samplers by the cool Underground Label Strobelight Records), while some elements sound like DAVID BOWIE meeting the MISFITS or ALICE COOPER having fun surfriding on a coffin. Here and there a sleazy bunch of undead people act as if they would like to show Guns’n’Posers posthumously the ins and outs.
You can roughly file the band under Horrorpunk, but only if you don’t expect their music to stick to a pigeonholed formula.
You can also call it dark rock’n’roll and simply enjoy the energy of the songs, that are well written, arranged and produced. Take a seat in the old rocking chair (but make sure, that no ghost occupied it first) and enjoy the nice little surprises like the surf-guitar in “Dr. Doom” or the fluffy beat of “Queen Of Pain” that reminds me of IGGY POPs “Lust For Life”.
You won’t regret the ride through the acoustic tunnel of horror.

The influences might be scary diverse, but the five-piece manages to keep it all together as an eclectic bandsound. Moreover, they are technically capable of playing with the genres. Especially vocals of Scarlet Spiders and the guitars of Evil T. and Lurch show a great variety of expressions from raw and garage-influenced to dirty and bluesy.
Drummer Emilio “Dave” and bassplayer Deathwish deliver a reliable fundament, when the band performs “To The Beach” – a party song that could be placed between the surfpunk-anthems of PSYCHOTIC YOUTH or early HITMEN. By the way, I won’t conceal, that I always liked ladies on bass-guitar, so I’d say: take the visual pleasure as a bonus coming with a really convincing musical package.
By the way: A bandfoto reveals, that Deathwish seems to have a similar taste for scary high heeled boots, as Poison Ivy displayed it on the cover of THE CRAMPS’ record “Flame Job”. Anyway… some minutes later, the rhythm-section contributes some subliminal grooves to the forceful “Bang Bang” and rocks out straight when SCARLET AND THE SPOOKY SPIDERS vistit the “Snake Mother“.
This song is also a nice example for the self-reliant way, the Italians are using their potential for effective arrangements. In the last part, the vocals change to a surprisingly gothic-style and the mood is getting eerie…

I hope we can agree on the fact, that catchy songs about Sex-Vampires. that scan underwear with their x-ray-eyes or possession by the “Zombie Dance” combined with loud guitars are fun? If you were alienated by some of the comparisons in this review: Don’t fuss about it: “Weird Creatures” doesn’t sound like these influences. It just absorbed them to make them parts of a lovely new monster, that was born to kick ass.

Dare to meet this beast and decide for yourself. I made my choice. Here’s a promotional clip from 2012 for a first impression:

Sorry, the comment form is closed at this time.